I totally intended to add the required sculpted details to my Nurgle stuff this weekend. So far I've found myself creating the need for many more sculpting jobs instead. The positive in this is that my grimdark Nurgle warband is expanding rather nicely! 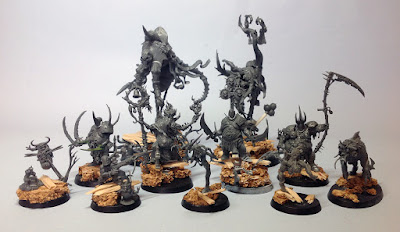 There's one model missing from this group shot but he's pictured separately at the end of this post. I love how they're starting to look as a group. They'll make for a funky looking warband, packed with character, but they'll also act as tone pieces for my bigger Nurgle AoS army (which I'm still fully intending to paint over the next couple of months). 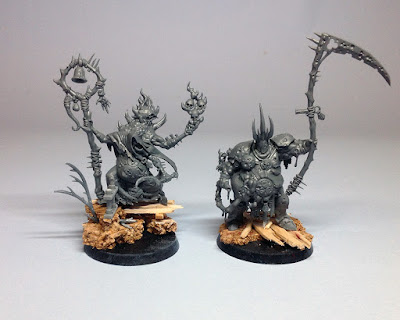 One of the models that's in that big Nurgle AoS army is a Glottkin, with these two utterly incredible models mounted on top of it. This gruesome pair just had to join the AoS28 group too, but I wasn't going to sacrifice a whole Glottkin (and the £66 it costs) to do that. So, I will magnetise these two at the feet, letting me swap them between standing on the Glottkin and taking their place on these bases. 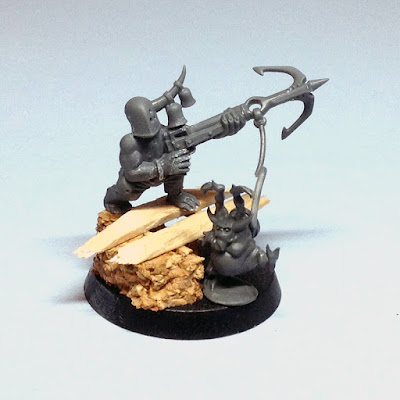 I'd already built a lot of bigger brutes but this was the first diminutive creation, starting as a 40k Gretchin. I chopped off the head and blunderbuss tip and with the addition of a Kharadron grapple and a Blightking helm I think he starts to fit in with his Nurgle bigger brothers rather well. The rope will be fixed to the spool (attached to the Nurgling's back) in a more seamless way when I add finishing touches. I imagine these two working as a team, hooking onto hard to reach areas (or enemies) and spooling the rope across (or reeling their prey in). 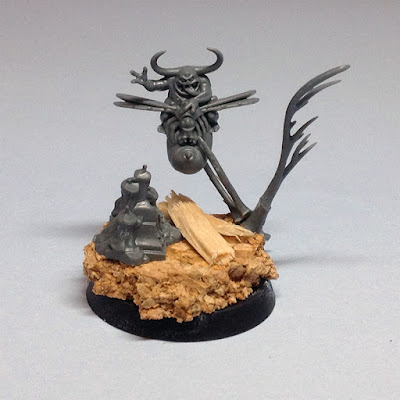 Nothing too complex here. This Nurgling is an amazing little mini, so I gave it a fancy base of cork, wood, an element from the Spirit Host set and some spare branches from a Treelord kit to suspend the model. 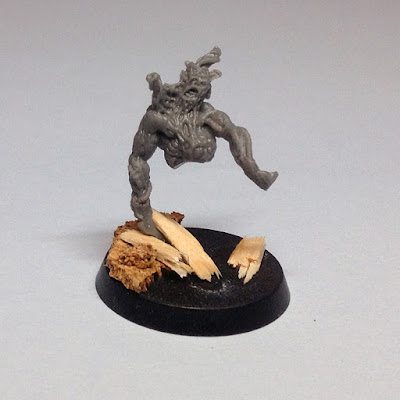 A long time ago CMoN took their first venture onto Kickstarter with the game Sedition Wars. It wasn't exactly great, largely because the quality of the casting was rather terrible. The game has sat unused in my Stack of Stuff (registered Trademark!) for quite a while. But, I reckon this guy fits in quite nicely as a freakish addition to the warband, so here he is! 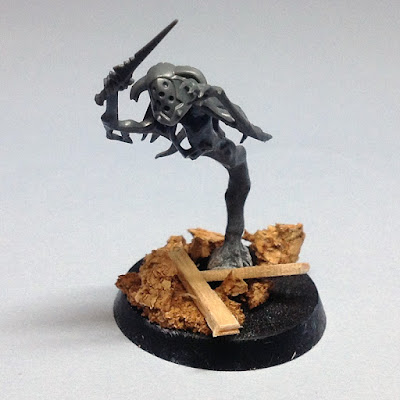 Making use of the Spirit Host spares again here. Some sort of ethereal being... I'm considering what to do with. It's on the way to working but perhaps needs something extra to fully fit into the atmosphere of the other models. 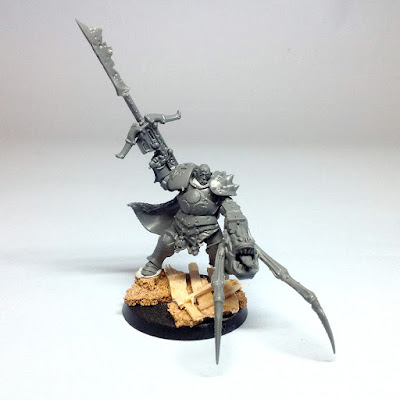 And here's the latest creation (who was missing from the group shot). He's a similar hunter to the converted Gretchin, just a fair bit bigger! I imagine him stalking foes with his crossbow, spearing them and letting his beast off the leash to drag them back to him.

I'll probably add some chain to the spear that's fixed in his crossbow. The Squig in his hand (from the Runtherd in the Gretching boxed set) will have extra detail sculpted at the face to make it more themed to Nurgle. I do love the pose here though, combining Stormcast and Nurgle bits pretty effectively if I do say so myself. Also, the stitched up eyes and mouth on his head (from the Plague Drones set) seem to give him a really dark and twisted feel.

I've got at least two more kitbashes on my workbench before I stop sticking parts and new models together completely. They're both pretty complex efforts. I'll try and finish them before the weekend's through so I can start sculpting details next week.
By James at 18:23