These Ashen Circle Marines have been in my collection for an age (pre-releases from a Games Day many years ago) so it's high time I finished them! Here are the ones that are actually fixed to bases right now, along with the bases for the rest (I often do the bases first because I adore making them, but more on this later!) 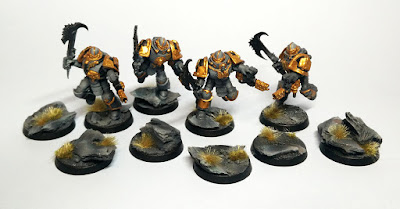 The models were airbrushed with tones of grey, starting out dark, then adding increasingly light colour to the top armour plates. The bottom left Marine in the photo below has had some edge highlights added in light grey, to test the final intended pop. I can see more contrast is needed from this little test, so I'm going to add extra depth and contrast with a dark, controlled wash in the recesses between the plates. Once this is done I'll add edge highlights across the armour. 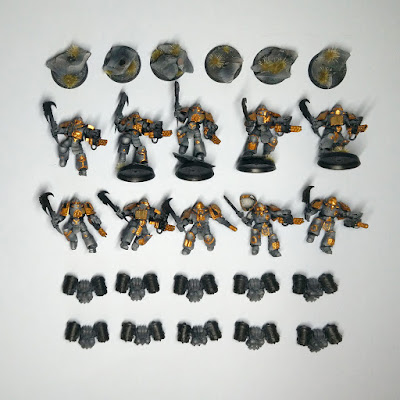 It's very possible I'll add some weathering and battle damage to the plates too, using a sponge for that quick, dirty, but effective look on the edges. I'm tempted to pull out the weathering powders too. I really don't click with factory fresh Marines so we will have to see just how grubby and battle-damaged these guys will get.

With the armour on the way I've started adding in a lot of shiny gold. I usually paint the area with a brown basecoat before adding gold. Once the gold goes over the top it really pops, brightened by the brown below. I'll do the steel ares next and once that's all done I'll build up depth with more washes, then add final edge highlights and a bit of gore.

I need to get to the shops tomorrow - lots of my paints have dried up in my painting downtime and there are some gaps in my collection, especially washes.

One of the problems with painting the bases before anything else - I can see that they aren't quite right at the moment - they are too close to the colour of the armour. I'll go in with a ton of weathering powder and/or washes to change the hue and saturation once everything else is done.
By James at 14:58