I finally opened my Rising Sun Kickstarter pledge from Cool Mini or Not. I wavered on backing this but some of  but the models and gaming systems they were presenting convinced me. It sounded pretty entertaining and it looked great.

I'm really happy to report that the quantity and quality of models and components looks to be just as awesome now they're in my grubby hands. This is the most potent mixture of generosity and quality that I've ever received in a large box of Kickstarter goodies.

I've not taken a proper look at the rules to play a game yet, but I'm kinda in love with various models here already. Some of them will probably make their way to my painting desk. A few of my favourite non-clan models are shown below. Part of me would love to paint some clan models too, but I feel like that's an all or nothing proposition and with 80 of them that's a pretty intimidating prospect!

If I get paint on any of these I'll be sure to show them here. 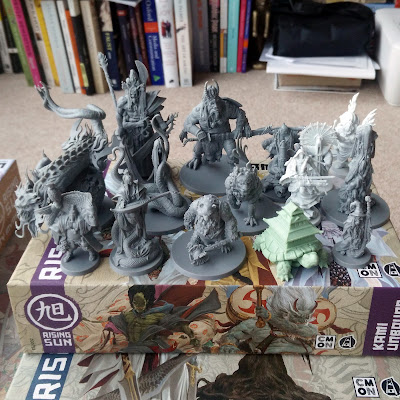 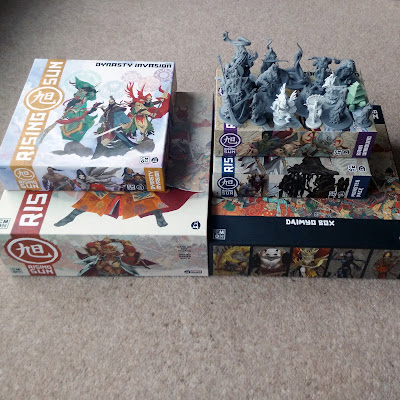 The weekend has mostly been about relaxing but I did fit in some hobby time before then. It's my Grandma's 90th birthday at the start of March so I'm making her a gift. She reads the Wind in The Willows every year and I'm hoping that this box diorama will go some way toward capturing the look and feel of E. H. Shepard's illustrations of Toad, Mole, Ratty and Badger. 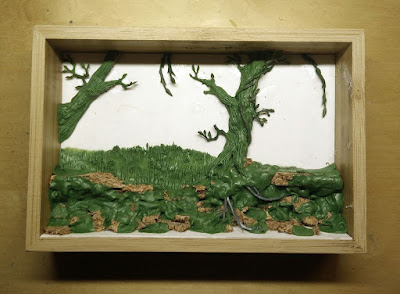 I've constructed a riverside scene using cork board, a fair bit of modelling putty and some bits chopped from the Sylvaneth Treeman set. So far I'm rather pleased with it and think it gives the illusion of depth despite being less than an inch from front to back.

I purchased some flat figures of the Wind in The Willows characters several years ago and I'm happy I'm finally taking steps to get this project done! It's one of those things that's been in my head for quite a while. Here's a look at the scene with the models in their intended spots. 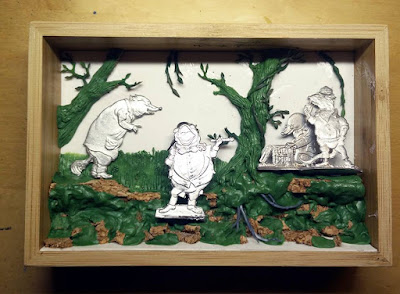 There's still quite a bit of work to do and I'm probably going to add some water-effects to bottom front, making a cross-section view of the river water. This scares me a bit. I've not done much resin water pouring and I'm concerned it could react badly with the wooden frame. I think it's possible it could soak in, take on some colour where it touches the wood, or fully warp the frame. I'll have to do some Googling and tests I think!
By James at 13:56