It's that special day of Valentine's - a chance for folks to make their romance stance known!

I've ended up with a wonderful and understanding girlfriend who makes me want to better myself every day and encourages me in my hobby pursuits without any hesitation. So, I'm happy to take any and every opportunity there is to show her I love her. As I'm getting back into mini painting again, I decided to make this year's Valentine's gift using some of those hobby skills. 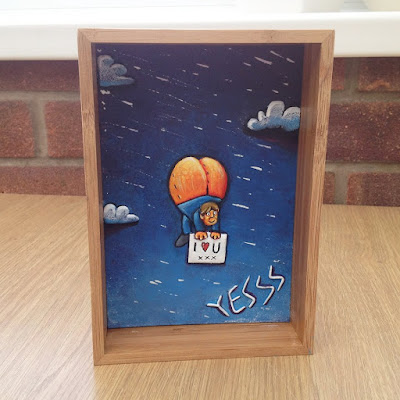 I've sculpted a fairly simple flat figure (with small changes in height across the plane of the model) and made a box diorama from it. The frame is from Ikea, but it's actually part of a bathroom set! If you want to try something similar it's the Dragan bathroom set of two lidded bamboo boxes that you're after. The bases will make two deep diorama frames and the lids are perfect for two shallow box dioramas (this one is made in the lid of the larger box). Best of all, it's just £9 for the set and they look really snazzy with the bamboo finish!

If you're curious about the scene I've made, it's me, but styled on the Big Butt Skinner balloon that Bart unleashes in an episode of The Simpsons (a show Jemma's a huge fan of).

Alright, I'll be back to the grimdark next time. Until then, much love, Happy Valentine's Day everyone. <3
By James at 18:52