After a long weekend with my girlfriend doing some belated Valentine's Day stuff I'm back at my hobby desk this evening. I've finished the build part of my Wind in The Willows box diorama and have splashed on some initial (and incredibly rough) colours.

The build remains pretty much as it was in the last update, but with sand and small rocks glued on to add extra texture and detail. I think I'm on the way to creating the riverbank feel that the Wind in The Willows characters (who will stand in it) demand, now it's just a case of adding in layers of extra tone and detail with paint. 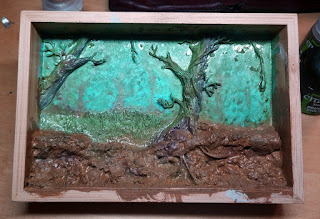 I'll soon need to decide if I add clear resin to the lower part of the scene, to give the effect of a river running through. I'm considering using a thin sheet of transparent perspex instead. I'd add ripple textures to the top of this and change the colour tone of the underwater part to sell the effect.

I think I'll get further with the painting here, then do some testing of both options. 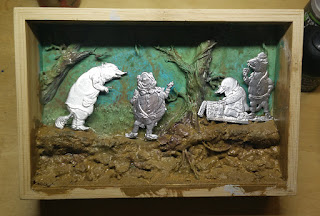 I also picked up some of Games Workshop's Creeping Vines and I'll use these to add depth to the scene, hanging them a little more to the foreground. I've stuck the models into the scene here to check the composition's working and I think that it is. This photo shows the colours a lot closer to their current state too - the first photo came out a little weird! I'll probably add more warmth - beams of light finding their way though the canopy of the trees and stuff like that. I don't want the scene to be too gloomy.

With just over a week until I give this to my Grandma for her 90th birthday I've got to get busy. I fear it may be a scramble to paint the miniatures in time but I'm starting to believe it will be worth it. :)
By James at 21:49