I couldn't resist getting GW's latest big beastie (plus the mini-me Morathi that's included). This is the first Daughters of Khaine model I've ever bought... actually it's the first Witch Aelves/Dark Elf I've ever bought (it's possible I may have inherited some in the dim and distant past, but nothing intentional) so it's quite an event! 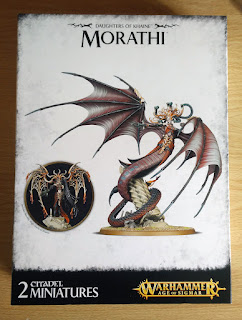 I've built her two forms (twice, because two Morathi kits are almost as speedy to paint as one in my brain) but it has to be said, they are far from the easiest of GW kits to put together. It's a cool model (with the exception of some seriously silly, over-the-top and not suited to battle high-heeled boots) but after a joyful and easy experience building the Nurgle new releases lately Morathi was a chore.

The snake tail is complex, nine parts make up the part that is wrapped around the column, and though it's a fascinating puzzle of 3D breakdown it's a real faff!

The main thing that almost caused me to totally mess the kit up in the build stage, though, is that if you build Morathi's Shadow Queen form separate to the column she WILL NOT FIT BACK ONTO IT! Not ever. At least I didn't think so as I tried to do this in various ways having built the model separate from the column to make painting easier. 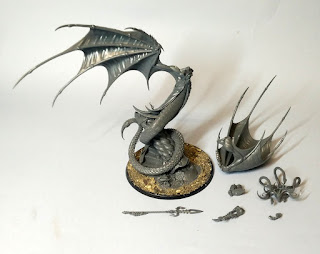 Luckily I noticed before the glue had fully dried. But, be aware of this! The instructions clearly show when to fix her to the column, of course, but as someone who paints in lots of sub-assemblies I was all set to keep the column and the snake-tail split until painting was done.

So, I'll paint the big version of Morathi as an almost fully built model. Which is most unusual for me. 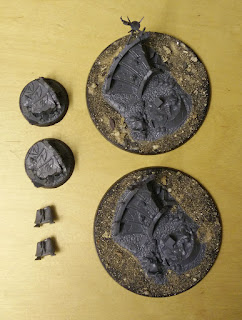 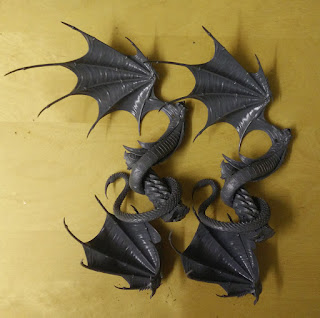 The smaller version of her, in stark contrast, is going to be painted almost un-built! Loads of parts logically break-down into individually coloured sections. The skin, the bladed wings, the cloak parts, even each of her impossibly high and very silly heeled boots, can be approached individually. So, that's what I'll do, then put it all together at the end. 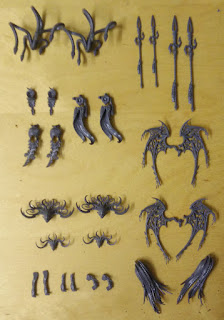 I'm going to try and work with a muted, fairly desaturated, blue-toned paint scheme here. It should bring about some good mood and atmosphere and give her a different vibe to the 'Eavy Metal version.
By James at 11:25